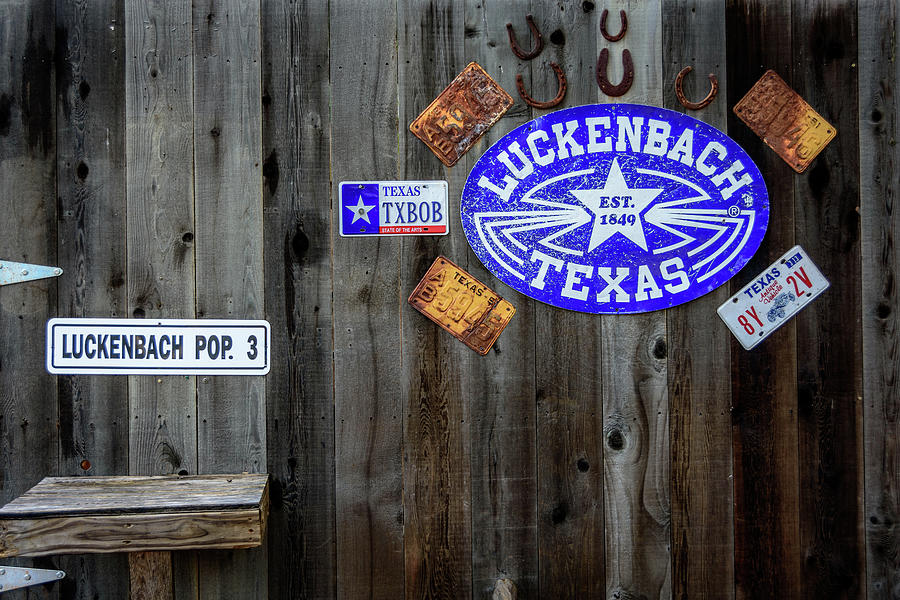 Luckenbach Texas Signs, Tags and Horseshoes by Debra Martz Luckenbach, Texas is an unincorporated community just a 10 mile drive from the popular tourist town of Fredericksburg in the Texas Hill Country. Luckenbach is known as a great venue for country music. It consists of 9.1 acres situated between 2 creeks. Its oldest building is a combination country general store and a saloon which opened in 1849. It is stated that the first name was Grape Creek but more than likely Gap Creek which comes from German ("lucken" meaning gap and "bach" meaning stream). The population increased to a high of 492 in 1904 but by the 60s it was almost a ghost town. A newspaper advertisement offering the "town - pop. 3 - for sale" led Hondo Crouch, a texas rancher and folklorist to buy Luckenbach for $30.000 in 1970, in partnership with Kathy Morgan and actor Guich Koock. Crouch used the town's rights to govern the dance hall as he saw fit. The remnants of a post office, which closed in April 1971, can still be seen at the general store/saloon. The general store serves as a souvenir shop with a variety of items that includes the town's motto "Everybody's Somebody in Luckenbach".

Thank you all very much for your comments! ~♥~

Nice capture in this iconic spot.

Great image and great write up too! l/f

Glad you enjoyed it

Nice sign image, Debra! Love the textures of the barn wood background with the pops of color.

Marcy, thank you very much!